While tensions have been building over several years, the Russian invasion of Ukraine has still been a shock to most observers. The impact on lives and livelihoods is, of course, the main issue here and like everybody we hope for a peaceful resolution soon.

In our sphere, financial markets, the focus is on the implications for investor portfolios. Most observers take the view that major geopolitical events and military conflicts are typically associated with short term downside with markets recovering over time. A look at history would tend to suggest this has been the case.

The September 11, 2001, terror attacks saw markets decline by around 12% over a 10-day period before recovering these losses within a month. Iraq’s invasion of Kuwait in August 1990 saw the S&P500 drop almost 15% over the following 70 days, before reclaiming this lost ground six months later.

The North Korean invasion of South Korea in 1950 was followed by a 13% decline in the S&P500, recovering these losses two months after the trough. The attack on Pearl Harbour in 1941 prompted an almost 20% drop in markets, taking almost one year to recover. Markets, more often than not, continued to rise over the subsequent 12 months.

However, relying on experience from previous conflicts is not sufficient. While the initial response to the uncertainty of conflict is fear and the search for safety, we believe that in navigating the way forward, investors need to understand the economic backdrop, the prevailing trend, and the potential for flow-on effects to growth, inflation, and policy responses.

For example, in the 1990 and 2001 events mentioned above, the US economy was in or near recession, policy was being eased and there was plenty of scope to ease policy further. The dominant theme and the backdrop to the current conflict is one of rising inflation, tight commodity markets and generally strong growth, with central bankers poised to bring policy rates closer to so-called neutral over the coming 12 months.

Crude oil on the boil

Russia is a major player in energy markets, it is the second largest exporter of oil after Saudi Arabia, providing more than 11% of global oil production and close to 17% of global gas supplies. Europe is its major customer, sourcing around 25% of its oil and almost 40% of its gas from Russia.

Initially, sanctions were targeted at Russian access to banking and capital markets, although an increasing number of countries have since broadened the scope of their sanctions to include Russian exports. Energy prices are already reflecting that risk with oil up through US$100 a barrel and aluminium, nickel and gold also rising.

The Russian invasion has clearly exacerbated concerns over energy supply, adding further upside to energy prices and several other key commodities. This has clear inflationary implications and may, if sustained, ultimately undermine growth.

It is too early to say if this will crimp central banks’ tightening plans, as it depends on how long the conflict lasts and the extent of any flow on to growth and inflation. Further sanctions and Ukraine resistance could provoke increasingly aggressive responses from Russia, or they could pave the way for negotiations. At this stage, central banks are unlikely to alter their plans for “normalization” although they will likely tread a little more cautiously and, as usual, their actions will be data dependent.

Russia’s aggression has sent shockwaves through financial markets, with equities potentially at risk of more downside over fear of further escalation and uncertainty. The temptation to sell into this weakness is understandable; however, accurately predicting the trajectory of geopolitics is fraught with danger.

We caution investors not to succumb to emotive impulses during heightened market volatility, as indiscriminate selling is often followed by sharp relief-rallies which active managers can exploit. Fortunately, our investors can take comfort knowing that our portfolios are intentionally structured to provide downside protection during risk-off scenarios, with multiple levers providing uncorrelated and differentiated return drivers. 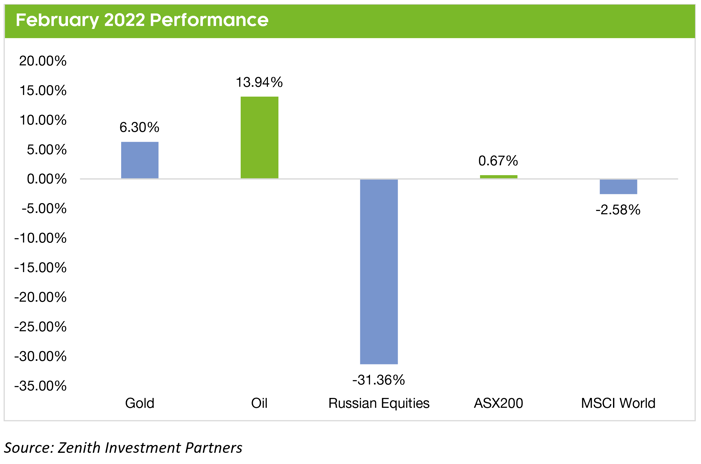 Order out of chaos

Our portfolios’ healthy allocation to high-quality government bonds has acted as a ballast against equity market weakness, as investors flock to the perceived safety on offer versus equities. As bonds have been bid up, this has partially offset the broader drawdown experienced across equities. This is important to note as we recognise the headwinds posed by rising interest rates (bond yields and prices move inversely), yet as expected, the defensive qualities associated with bonds have been reasserted as equity market sentiment has waned.

Throughout this market correction, it’s likewise been encouraging to see our Alternatives managers dampen volatility and enhance risk-adjusted returns. We consistently advocated for the use of Alternatives in portfolios due to the insulation offered from typical equity market dislocations.

This is due to managers’ unconstrained mandates which allows them to take both long and short positions in non-mainstream assets, such as gold, commodities, currencies, and options. Whether its managed futures where directional views can be expressed through trend signals, or global macro where valuation discrepancies can be exploited across securities, sectors, regions and asset classes. Similarly, our market neutral and multi-strategy allocations have proved to be sound portfolio diversifiers amongst broader market turbulence.

The ability to profit in falling markets (shorting) isn’t constrained to our Alternatives line-up, with our domestic equity long/short allocation likewise bucking the trend and generating attractive gains for investors over this period. And whilst the remaining portfolio elements exhibit varying degrees of equity market beta, our institutional risk and analytics tools have allowed us to calibrate our portfolio construction to ensure that we aren’t over-exposed to any unintended risk-factors.

Importantly, periodic and sharp falls in markets are normal, and attempting to tactically sell and re-enter is notoriously difficult to achieve. Historically, geopolitical events have resulted in aggressive sell-offs, followed by relatively swift recoveries, so we implore investors to retain their long-term investment strategies.

In light of the unimaginable human suffering, it might be difficult to maintain a dispassionate outlook as the fog of war descends; however, remember that markets will bottom well in advance of a positive shift in investor sentiment. This suggests that making reactive or hasty portfolio decisions could be to the detriment of meeting your long-term objectives. As such, our view remains that the best defence during times of uncertainty is a robust portfolio construction.