Despite most expectations, 2018 proved to be a very disappointing and jarring year for investors. Not only did volatility return in abundance, particularly in the first and last quarters of the year, but almost all asset markets ended the year in negative territory. The equity market darling for most the year, the US stock market suffered a double-digit decline in the fourth quarter, ending its worst year since 2008. Surprisingly, global and Aussie bonds were the only shining light, outperforming most developed equity markets, an outcome few would have predicted at start of 2018. 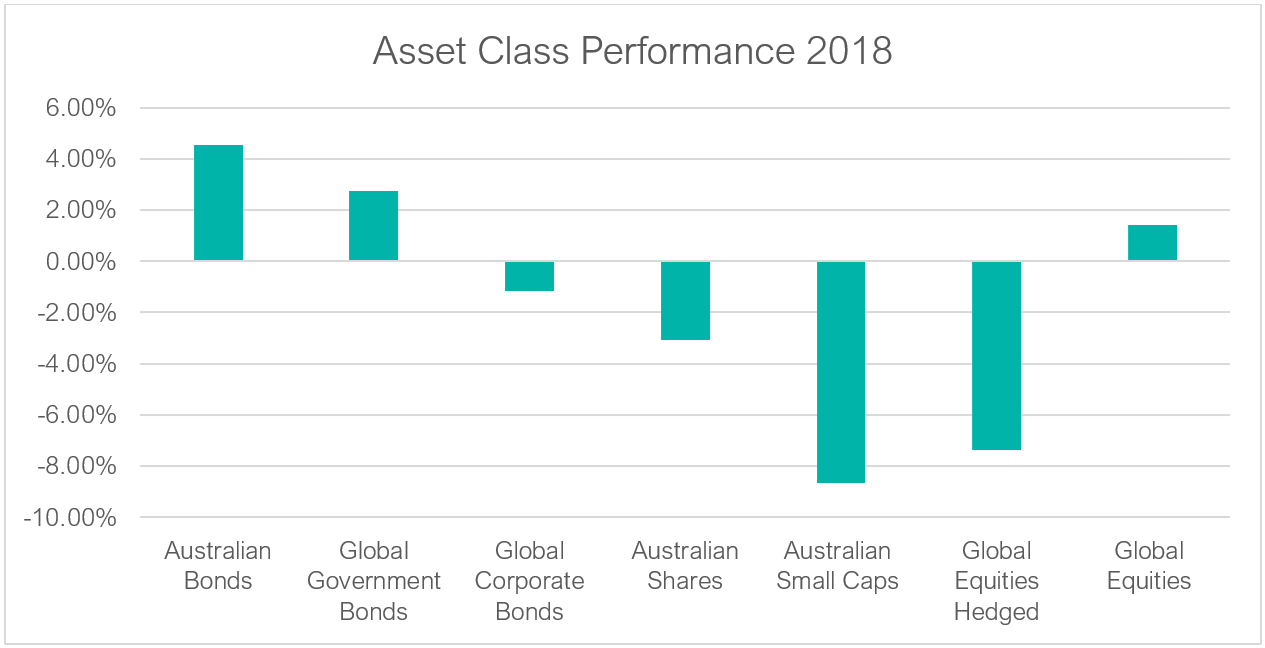 Given this backdrop, what’s the outlook for 2019 and what could sideswipe markets? The consensus is that the outlook has become more uncertain, with the tail risks to global markets now larger than they were 12 months ago. There are plenty of known risks, that have been well documented in the media, including:

However, while the outcomes of these risks aren’t known, it could be argued that markets have somewhat priced in the possible scenarios. What about risks that aren’t priced into markets? Former US defence secretary, Donald Rumsfield, famously referred to these as “unknown unknowns”. That is to say, there are risks that few investors have factored in e.g. Major Arab conflict. These are what generally sideswipes markets.

Amongst the perceived increasing level of uncertainty, investors are now more than ever seeking guidance as to the course of markets in 2019.

Forecasting - an exercise in futility

Many investors will look to so-called experts, who will release their forecasts for markets over the coming year. However, are these forecasts worth the time and effort that investors spend pouring over them?

To help answer this question, lets reflect on the year just gone. At the beginning of 2018, the median broker forecast for the ASX200 was 6300, representing a calendar year return of 6.3%. If an investor had taken this on board and invested wholly into the index, they would have generated a realised return of -3.07%.

Moving over to fixed Income markets, how do the experts fair in this domain? Let’s focus on Jerome Powell and his economics team at the US Federal Reserve (Fed). Generally revered as omnipotent, how have they fared in terms of where interest rates might go? Movements in the Fed’s predictions (dot plots) make ripples in investment markets globally. However, the Fed just like everybody else, have a poor record of forecasting outcomes. The below chart compares the median forecast over the past 5 years with the effective funds rate. We can see from the Chart that the Fed have been overly optimistic on the trajectory of interest rates for some time.

To make matters worse, the Fed itself seems to have little confidence in its forecasts. The below chart produced by the Fed, demonstrates with how much confidence the Fed believes it can forecast rates at 70% and 90% intervals. 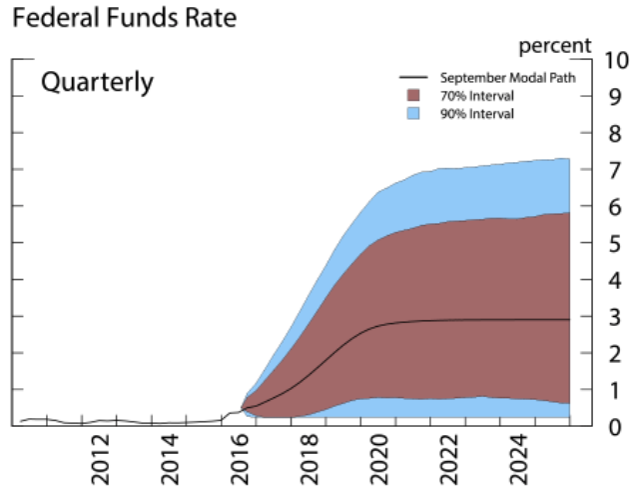 The above chart produced in 2017, shows how little confidence the Fed has in its own predictions. While the fed expects the long-term rate to be around 3%, they can only assign a 90% certainty that the Fed Funds rate will lie between approximately 0% and 7%. Given the wide range, investors should take the dot plots with a grain of salt.

Investors often believe that stock markets reflect the economic conditions of their respective countries. They hypothesise that if an economy is growing, output will be increasing and firms should be experiencing increased profitability, with the opposite also true. Assuming this is true over the shorter-term, it would still be necessary to have accurate forecasts to enable investors to take advantage of this hypothesis. So how do professional economists fair in their predictions and can their forecasts help us navigate markets?

Unfortunately, the answer is most likely “no” in terms of forecasting skill, as economists have shown limited ability to predict the direction and magnitude of growth. Even all the PhDs at the International Monetary Fund (IMF) have shown very little success. Over the past 27 years, the IMF has predicted on average that 5 economies would be in recession, when in reality the number has been 26.

Furthermore, they tend to have the greatest error when it matters the most. In October 2009, the IMF predicted economic expansion for the US and Japan. When instead, the US contracted close to 3% and Japan a whopping 5.4%.

However, even if you manage to forecast with near perfect foresight, it’s been shown that the short-term linkage between GDP growth and stock returns is weak. 2018 was a great example, the US economy expanded at a rate of 3.4% at the end of the third quarter and US equities declined -4.38%. A clear disconnect, as the US economy continued to perform well and earnings growth remained robust, however, markets were plagued by macroeconomic and sentiment issues.

Similarly, in the years leading up to the GFC economic conditions within the United States and Globally were favourable. Economic growth was strong, rates of inflation were stable, and unemployment and wage growth were healthy. However, the catalysts that emerged were not apparent from these headline figures, and caught most economists and investors wrong footed.

How to prepare clients for period ahead

As human beings, we love certainty, which is why we gravitate to so-called expert forecasts time and again; even though we know they will almost certainly be wrong. In saying this, we’re not questioning the skill of these experts, merely pointing out that predicting the future is almost impossible, because it relies on numerous assumptions and a pre-determined series of events occurring. More often than not, the unknown unknowns get in the way of the central thesis and take markets on a different path. You only need to think back to the decision by the UK to exit the European Union in June 2016 or Trump’s victory in the US elections in November 2016; and the markets initial and subsequent reactions to these events to realise this.

More so, one of Warren Buffett’s famous quotes, “in the short-run markets are a voting machine but in the long-run they’re a weighing machine”, i.e. sentiment drives markets in the short run and is a fickle beast.

Clients need to accept uncertainty is part of investing, as in life. The only certain return is cash (at least in nominal returns), and that’s not going to give investors the returns they require over the longer-term. It’s interesting that people always believe there is less certainty at any given time, when in fact, there is never any certainty. No one can tell you what’s going to happen tomorrow, next month or next year. The biggest challenge for clients is the behavioural aspect of investing, e.g. not selling low and buying high, having the conviction and fortitude to stay the course.

Investors are often tempted to time markets, i.e. employ tactical asset allocation to go to cash in times of market stress. However, doing so requires exquisite timing, not only on the exit but also on the re-entry (this ignores transaction and tax costs). Missing only a few days in the market, can dramatically impact your longer-term returns. 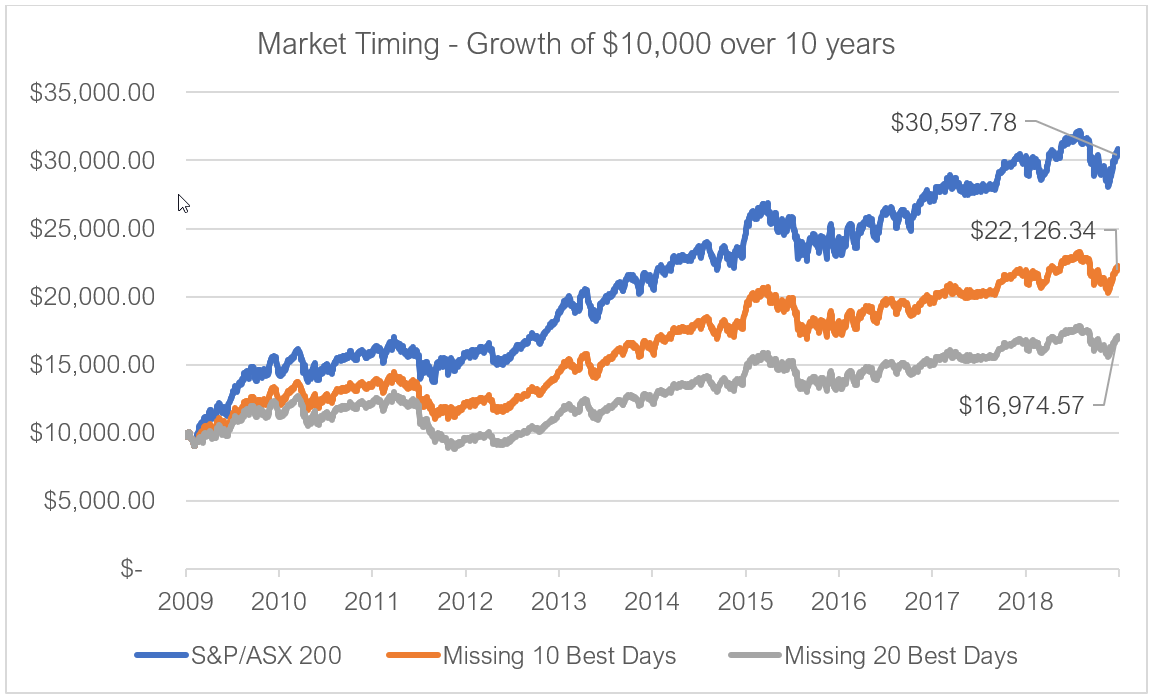 Having an appropriate time horizon is the key to successful investing. While over the short-term, the direction of asset markets isn’t predictable, over the longer-term the dispersion of returns decreases dramatically. The below return funnel shows the dispersion on rolling annual periods for a Balanced Fund (60% growth/40% Defensive split).

What does this mean for portfolios?

If we accept that there’s no way to predict the direction of markets in the year ahead with much certainty, how should investors position their portfolios? To borrow a line from Jacob Mitchell (Chief Investment Officer at Antipodes Global Investors), they need to embed “multiple ways of winning” in portfolios, one that is not reliant on a narrow outcome. That is to say, while it’s prudent to remain vigilant to the risks in portfolios, the best defence against market weakness, is to have appropriate diversification.

Diversification can often be a throw away line but if executed properly, this can mean that portfolios are more resilient to lots of different scenarios and outcomes. Investors should seek to understand how sensitive portfolios are to different economic conditions, which is where quantitative tools (optimisers, stress and scenario testing) can be very insightful. However, such tools have limitations and qualitative judgement should always be exercised. This means that portfolio should be diversified not only across asset classes but within asset classes and across strategies. However, for this diversification to be an effective strategy, investors should remember that having an appropriate time horizon is key, preferably one that looks beyond 2019.

Article Published in Autumn edition of Perspectives by IMAP.