Australian fixed interest (AFI) markets enjoyed a period of strong absolute performance with the Bloomberg AusBond Composite Bond Index returning 7.9% for the twelve months ending 30 April 2019. While a rally in bond markets boosted headline returns, the market was largely positioned for rising bond yields, which resulted in relative underperformance across the peer group. The following table includes a performance summary for the major bond indices and sub-indices. 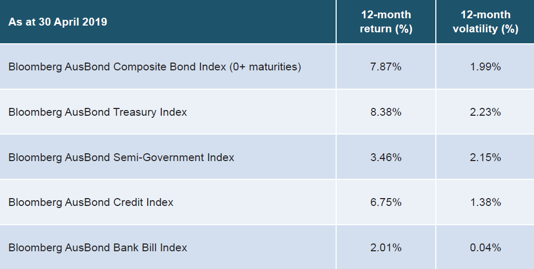 Over the period, the performance of active management was characterised with high performance dispersion across sub-categories. Most notably, the ‘Low Duration’ category struggled to keep pace with the gains in government bonds, largely due to its structural underweight to government duration. Typically funds in this category are managed to a tailored benchmark, comprising equal weightings to the Bloomberg AusBond Composite Bond and Bank Bill Indices, and have a structurally lower exposure to duration, relative to their more traditional counterparts. The following chart plots the interquartile ranges across each of the Zenith AFI – Bonds sub-categories. 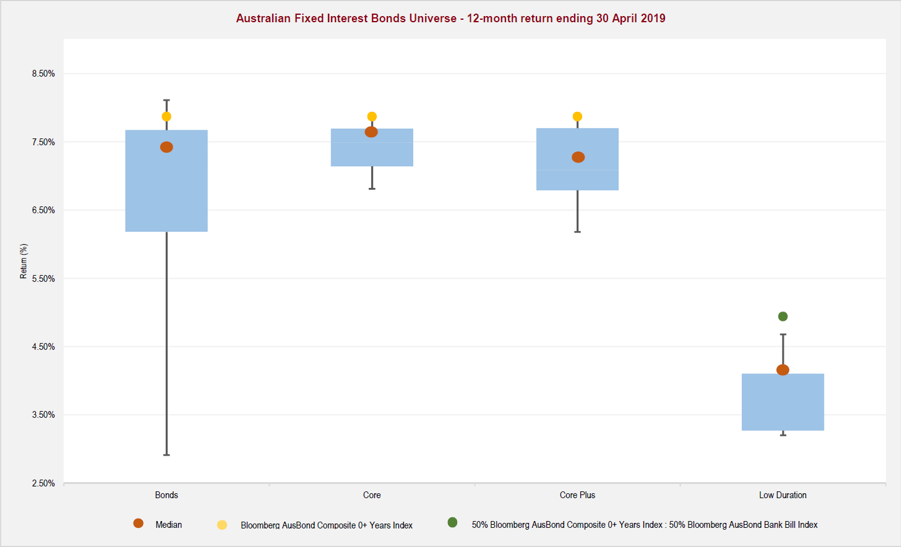 Interestingly, the ‘Core’ sub-category produced the greatest consistency of returns, reflective of its more benchmark centric approach. While the median manager struggled to outperform in all categories, if we adjust the index to reflect the cost of passive investing (i.e. 0.20% p.a.), performance was more aligned with expectations.

Over time, Zenith has observed more consistent risk-adjusted performance from ‘Core’ managers relative to their ‘Core Plus’ counterparts. To illustrate this, the following chart compares the Sharpe Ratios for each of the AFI sub-categories for the five years ending 30 April 2019.

Over the analysis period, ‘Core’ managers generated a 0.16 higher Sharpe Ratio relative to ‘Core Plus’ managers, which is potentially counter-intuitive given their more constrained mandates and fewer sources of active return. While these results can be sensitive to ‘point-in-time’ measures, the outcome is consistent with our research which indicates that it has become more challenging to generate consistent excess returns from active duration management.

Further, we have observed structural ‘short’ biases across the AFI – Bonds Universe, which has been expressed through both directional and steepener trades (i.e. overweighting the belly of the curve and underweighting the long end).

The following chart plots the average active duration positioning for Zenith’s AFI – Bonds Universe on the left-hand axis and the 10-year Government bond yield on the right-hand axis, for the three-years ending 31 March 2019. 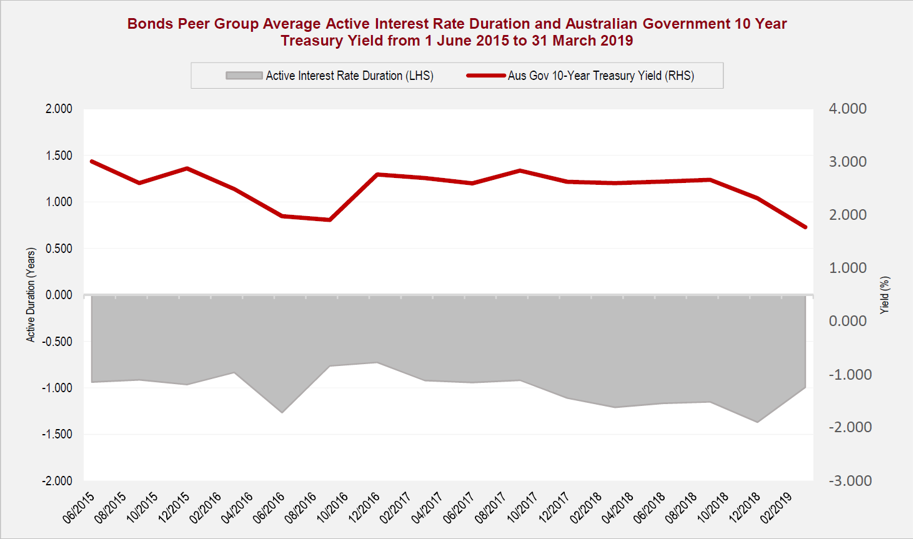 Based on the chart above, the Zenith AFI – Bonds Universe has on average retained a -1.0 to -1.5 years underweight to duration. With government bond yields experiencing a secular decline over the past decade, it has been a consistent detractor to relative returns.

Zenith has observed a propensity for the peer group to express active risk in credit, which has oscillated between overweight and underweight positioning, subject to the prevailing environment. The following chart plots the average active credit duration positioning for Zenith’s AFI – Bonds Universe on the left-hand axis and the OAS Spread for the Bloomberg AusBond Credit Index 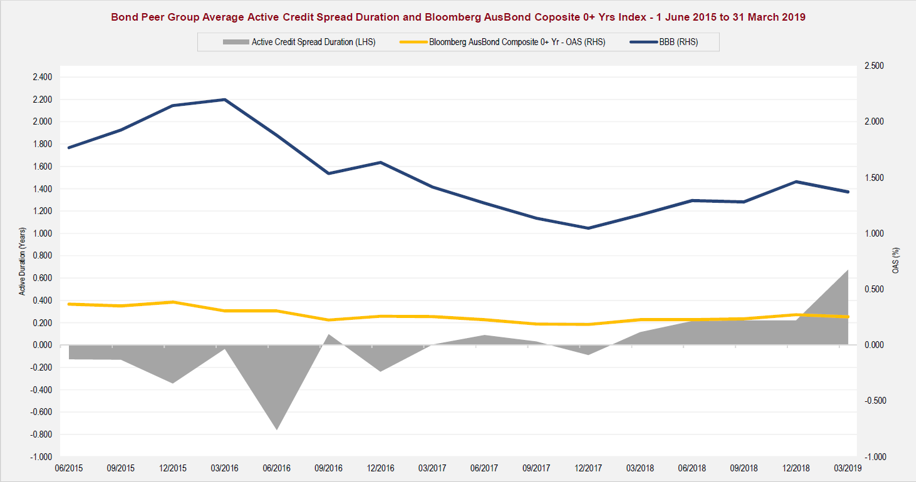 Over the analysis period, the AFI – Bond Universe was active in managing its credit duration position relative to the benchmark. While the peer group has been successful in protecting capital, its contribution from tactical positioning has been varied. Furthermore, the peer group was generally slow to react to the spread rally over the first part of 2016, while more recently it carried an overweight bias into the latter half of calendar year 2018.